In a touching story from a few years ago, we all learn that it doesn’t matter your position in life, everyone can wear a name tag!

To be easily identified in the hospital wards, Ralf, a Giant Schnauzer, must wear a Photo ID on his collar. Ralf has been working miracles by getting kids back on their feet after their operations. He sits with them during treatments or takes them on walks around The Royal Children’s Hospital.

An excerpt from Ralf, by Anne Crawford 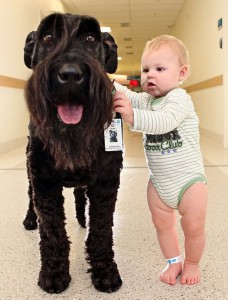 “It was late March 2012 when Caroline Lovick discovered that the family pet, Ralf, a Giant Schnauzer, had become famous. Ralf was a ‘therapy dog’ at The Royal Children’s Hospital in Melbourne, padding the wards every week with Caroline, visiting young patients who were ill and injured, helping in their recovery in often remarkable ways. A daily newspaper published a story on 20 March about the ‘miracle’ pooch and the effect he was having on children and adolescents, with a photo of a toddler, Zeke Harrison, who had a rare genetic disease, walking the corridors of the hospital next to the huge black dog. The article and picture of the chubby-legged infant wearing a nasal-gastric tube went from Melbourne to Sydney to newspapers in the United Kingdom and the US, and then spread on the internet. The story took off in Europe. Spain. Turkey. India. Chile. A German radio station sent a crew to Australia to record a show on Ralf. Dawn French, the British comedienne, posted Ralf on her Facebook page. A woman called Karla from Donegal sent him a gift of engraved dog tags on behalf of the people of Ireland. Caroline had always known that there was something special about the dog that looks you directly in the eyes from beneath his shaggy forelock and bushy brows with kind brown eyes. But she wasn’t prepared for this. Ralf had gone global.” 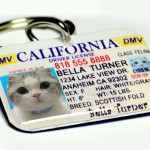 All pets can have their own Photo ID or name tags. Design your own, or choose from a variety of stock name tags.

One thought on “Photo IDs Aren’t Just For People”

This site uses Akismet to reduce spam. Learn how your comment data is processed.