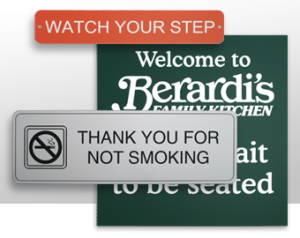 From offices to schools to homes, signs are everywhere!

No, we’re not talking about street signs and warning signs. And, while we love each sign equally, we are talking about custom and stock engraved signs to help your business and home run smoothly.

From being able to choose the color, font and text to adding a logo or graphic, these custom designs are only limited by your imagination. The best part of choosing a custom sign is that you can be as creative as you like. From logos to graphics, let us help you design the sign of your choice. Add personal text and make it just as unique as you are. 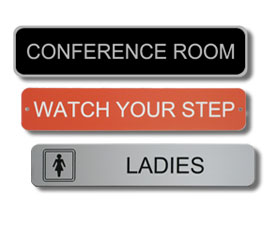 Displaying information in an office or store can significantly increase productivity and customer relations. Provide directions or give meaning to organization with a simple, stock sign. Or, create your own unique style with a custom sign. Add text and graphics for a truly one-of-a-kind style for your business.

Office signs are perfect for directions and instructions for every business and office are available to meet the unique needs of your company. Use wall and door signs to direct clients and customers to the right place. Use a warning or instructional sign to let everyone know of hazards and policies. You select the size, text color and graphics. 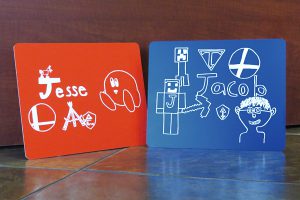 Personal and Home Use

From creative kid signs to useful kitchen and laundry room directions, custom signs just became your best friend for your home. Provide washing instructions in your laundry room. Or, give specifics on how to use kitchen appliances. And, let your kids participate in the designing of each custom sign. Their imagination is sure to make your sign not only unique but also something you will hold onto for the rest of your life.

Or, make a custom sign for someone you love with special sayings, quotes and so much more! Put one of these into a frame and give them as a gift. Perfect for birthdays or holidays such as Mother’s Day and Father’s Day. These special and unique signs are sure to please the hard-to-buy-for person on your list.

So, no matter your signage needs, we’re sure to have something that fits you, your business and your budget!

Sometimes all you need is a creative mind, and you’ll have an instant piece of art.

Crafting and being creative at home is a treat when it comes to being a parent. But, sometimes it’s hard to let your child be themselves with their creativity. Here’s a project that will encourage each child to reach deep inside to discover their truly unique self.

Adding a door sign to a child’s room is the perfect touch to help them be themselves. Custom signs are perfect for bedrooms, playrooms, bathrooms and even a nursery.

Design custom signs with your text, logo and graphics. Use for your business, name a cabin or room, present an inspirational quote. Choose the size, color, font, text and an optional logo or graphic to create the perfect sign for your office, home, or to give as a gift for a friend, loved one or yourself.

This project takes these custom signs to a new level of creativity. 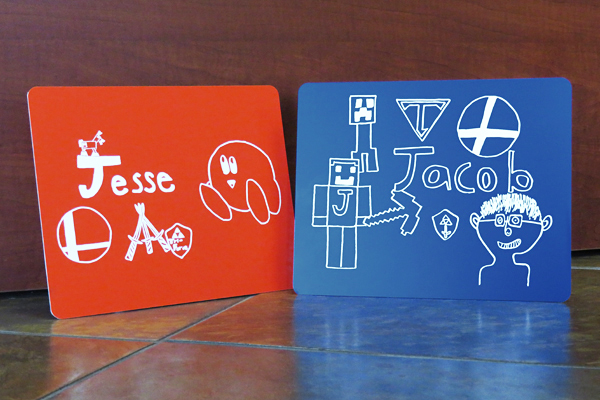 Both of these signs were drawn entirely by hand! Once the drawings were complete, a little bit of clean up was necessary. By tracing the lines with a permanent marker, the lines became clearer and sharper so that it was easier to engrave into an actual door sign.

As no other adjustments were made other than the tracing, these signs can be customized to meet any bit of creativity. Just sit down with a pencil and eraser and have at it! While these drawings are the musings of preteen boys, it isn’t a project limited to just a child. Make a sign for an adult’s room, the laundry room or even your garage door.

Each custom sign created this way must go through a particular process. We started with a plain, white piece of paper which was trimmed to the size of the sign we wanted. The children then drew away with a pencil and had an eraser handy for correcting. Once the child finished their artwork, a parent used a black permanent marker to trace the drawing onto a new, cut to size, blank, white paper. The tracing was done to create a clean, black and white image that could be scanned into a digital format. If you would like to attempt such a project, please call for more information before submitting an order.

These signs were hung with a strong, double-sided tape. Other fastener options include magnetic tape and Velcro. But, no matter what adhesive is your choice, these fun and unique signs are sure to be a hit with your child. And remember that when making a custom sign, being creative is the name of this game!

Most of the products that we offer require Vector Artwork to be able to include your logo or custom graphic. But a lot of people have never heard the term and don’t know what it means. A common misconception is that JPEG or PDF files can be Vector files, but we’ll break it down so you can tell the difference.
JPEG vs. Vector

JPEG:
Most cameras save photos as JPEGs, but if you open a JPEG image and zoom in, you will see tiny squares of color called “pixels”
If you make the image bigger, the pixels get bigger too, until they are clearly visible to the naked eye. Images where the pixels are individually visible are referred to as “pixelated”.
Basic shapes and colors use these pixels, placed in a grid, in thousands of different colors. The result when you zoom out is the complete image that you see.
To make curves in your image, pixels on a grid create a jagged look.

Vector:
There is no grid of colored squares like in JPEGs. Instead, the online of shapes making up the image are mathematically plotted by the computer program. Then the program has been told what color (or colors)to fill that outline with.
The image is very smooth and high-quality.
To make curves in your image, vector artwork isn’t restricted to a grid, so the curves are genuine and smooth.

Why Do We Require Vector Art?

The key here is the type of process being used to create the image.Laser Engraving, Hot Stamping, and Ribbon Imprinting share a single fact the process is 100% there, or not there at all.

With Laser Engraving, for example, the laser burns the plastic or metal, removing the top layer in that spot to reveal a different colored layer beneath. The laser has either burned, or it hasn’t there’s no half-burned areas.

Now remember how those JPEGs are made up of squares of color? A curve on a black shape might appear smoother to our eyes by having some of the pixels towards the edges be shades of gray rather than full black. But the laser can’t do that. So those gray squares will be burnt just the same as the black, red, blue, and all the other squares. And you end up with something that probably doesn’t look much like your logo.

But vector art, well, it can tell the laser exactly where the edges of your shape are so that the laser knows just how to get your image onto your product, filling in the outlines as it goes.

The same is true for Hot-Stamping and Ribbon Imprinting, which both use metal dies, either the color foil is stamped on in a spot, or it’s not.

How Do You Create Vector Art?
Two of the most popular programs are Adobe Illustrator and CorelDraw. Vector art files will most commonly end in either a .eps or .ai although there are some exceptions.
We do have a few options for those customers who do not have vector artwork files of their graphics. And we also can take most images and create vector artwork for them, for a small fee. (And you get to keep the file for future use!)

Melanie Bunch has been a graphic artist for over 13 years and is on the Design Team at Name Tag, Inc.. In her spare time she enjoys scrap-booking, Taekwondo, and arts and crafts. Be sure to watch for more of her articles from a designer’s perspective!